Return to the Batcave: The Misadventures of Adam & Burt 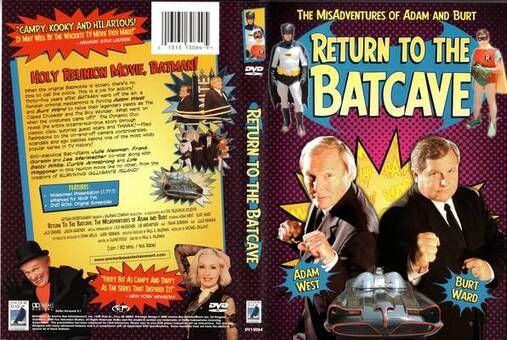 If you’re a fan of the 1966 Batman TV series, then you need to watch, Return to the Batcave: The Misadventures of Adam & Burt. This made for TV movie aired on CBS in 2003 and reunites stars of the original Batman TV series cast. Adam West, Burt Ward, Frank Gorshin and Julie Newmar all star as themselves. One of the executive producers was Dawn Wells (Mary Ann from Gilligan’s Island).

The plot involves West and Ward trying to solve the mystery of who stole the classic TV Batmobile  from a museum charity event. This comedy features flashbacks with actors Jack Brewer and Jason Marsden portraying the younger West and Ward. Check out the trailer below.
The movie goes back and forth between West and Ward discussing their time together on the TV series and flashbacks that provide a behind the scenes glimpse into how the show began and more. This TV movie also features an awesome replica of the Batcave, clips from auditions and funny stories such as the Legion of Decency not being pleased with the way Ward’s costume fit.

They also recreated a few behind the scenes moments; one scene shows Vincent Price starting a food fight with eggs on the set; another scene shows Burt Ward annoyed with Adam West because he was speaking too slow in their scene in order to take up more screen time; then Ward would have to quickly say his lines to ensure the scene didn’t run too long. Also mentioned is the addition of Yvonne Craig as Batgirl in the 3rd season and talks about how the show was cancelled due to poor viewership.

There are also some surprise cameo appearances by Lee Meriwether, Lyle Waggoner (who also auditioned for the role of Batman), Betty White, and Nina West (Adam West’s daughter). The movie was shot on location with some scenes filmed at Bronson Canyon in Los Angeles, the exterior location of the Batcave.

​The campy theme and dialogue are reminiscent of the TV series. If you loved the Batman TV series, then you shouldn’t be disappointed with this TV movie. It was a great tribute to the show and you can tell the cast had a lot of fun doing it.

All logos, characters, graphics and other elements are trademark and copyright protected from their respective owners and are used for the sole purpose of promotion. We are not affiliated with DC Comics or Warner Bros.