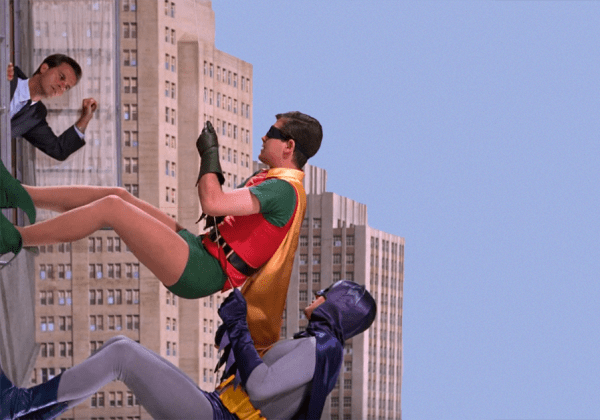 Back in the late 1960’s, movie stars and other entertainers were lining up to star in the Classic TV Series, Batman. The demand was so great that cameo appearances were included when Batman & Robin would do one of their Bat-Climbs up or down a building. Someone would open a window while the Caped Crusaders were climbing and they would interact and have some funny lines.

​They were memorable moments and a total of 14 window cameos appeared throughout the 120 episodes of Batman. Even Frank Sinatra wanted to guest star and play the Joker! While Ol’ Blue Eyes from the Rat Pack wasn’t on the show, they did manage to get Sammy Davis Jr. to do a window cameo.

Click below to watch all the Batman window cameos now! Scroll to the bottom of this article to view a list of all the actors in the order they appeared in this video.

As you can see in this photo, the Bat-Climbs were done by simply turning the camera and filming the actors walking on what appears to be a building with a background. It was a cheap trick but it worked for the time. You can even see thin ropes in some scenes that appear to make Batman & Robin’s capes hang.
​
1. Jerry Lewis
2. Dick Clark
3. The Green Hornet & Kato
4. Sammy Davis Jr.
5. Bill Dana as José Jiménez
6. Howard Duff as Detective Sam Stone from Felony Squad
7. Werner Klemperer as Colonel Klink from Hogan’s Heroes
8. Ted Cassidy as Lurch from The Addams Family
9. Don Ho
10. Santa Claus
11. Art Linkletter
12. Edward G. Robinson
13. Suzy Knickerbocker
14. Cyril Lord, the Carpet King

All logos, characters, graphics and other elements are trademark and copyright protected from their respective owners and are used for the sole purpose of promotion. We are not affiliated with DC Comics or Warner Bros.